I’m an Inria researcher in  the AriC team, which is part of the LIP lab in ENS Lyon. I recently moved there after more than 20 years in the stimulating environment of the Algorithms project in Rocquencourt (near Paris). My field of research is computer algebra. It is the study of effective mathematics and their complexity: how much mathematics can be done by a computer, and how fast? In this area, I am mostly interested in applications to classical analysis (asymptotics, special functions) and combinatorics. See the menus “Software” and “Publications” for more information. 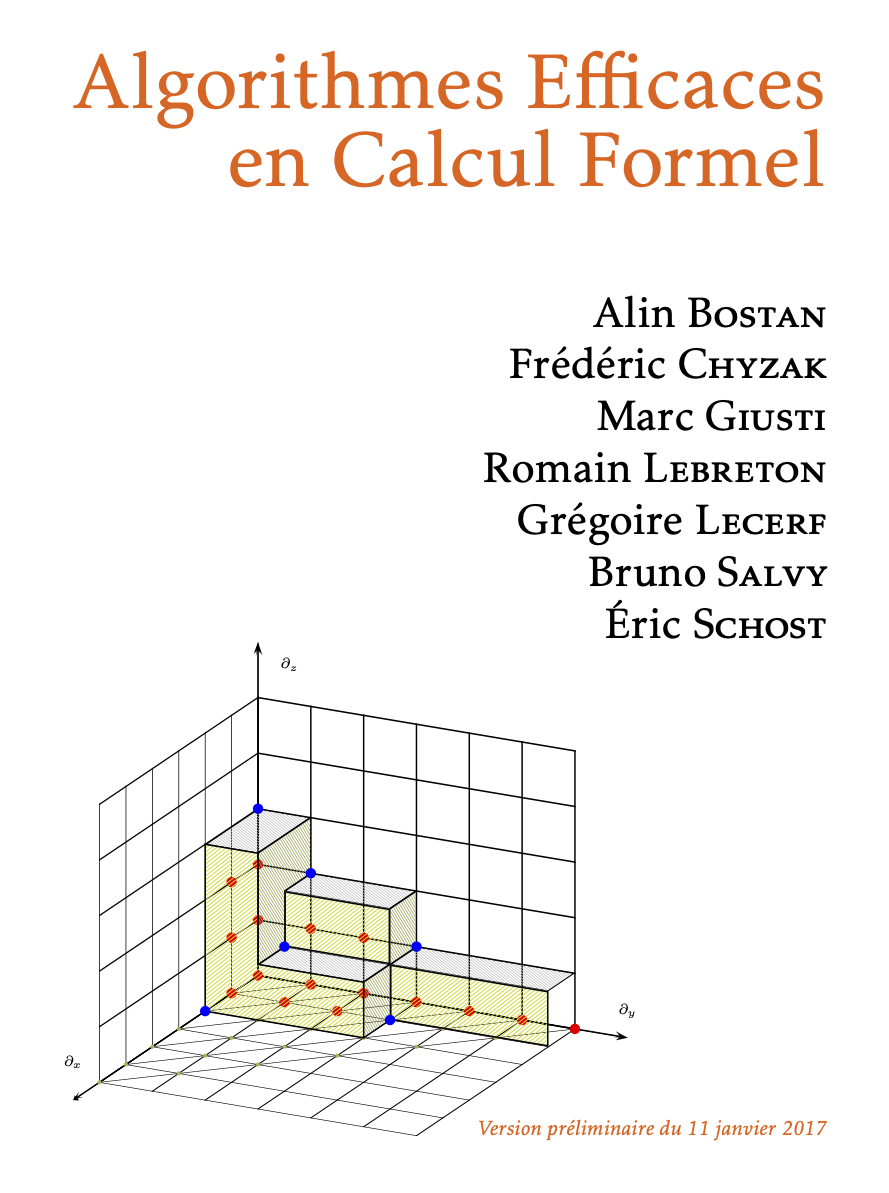 In August 2017, we finally published a book version of the notes of the course on efficient algorithms for computer algebra we have been giving for more than 10 years. Click on the cover to reach a page where you can download it for free or order an inexpensive paper version.

A power series being given as the solution of a linear differential equation with appropriate initial conditions, minimization consists in finding a non-trivial linear differential equation of minimal order having this power series as a solution. This problem exists in both homogeneous and inhomogeneous variants; it is distinct from, but related to, the classical problem of factorization of differential operators. Recently, minimization has found applications in Transcendental Number Theory, more specifically in the computation of non-zero algebraic points where Siegel’s $E$-functions take algebraic values. We present algorithms for these questions and discuss implementation and experiments. 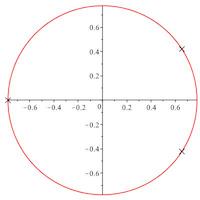 The three complex roots of the polynomial \(17x^3-9x^2-7x+8\), depicted on the picture, lie on two different circles, at distance smaller than 0.000015 and thus indistinguishable on the picture. Bounds are known for the distance between absolute values of roots of polynomials with integer coefficients. We improve the known bounds and run extensive experiments in small degrees in order to assert the quality of these bounds, that seem to be quite pessimistic.

Many families of hypergeometric series (but not all) share properties that are well-known for classical orthogonal polynomials. We consider six general families of hypergeometric series in a variable \(x\), indexed by an integer \(n\) and with an arbitrary number of parameters. For each of them, we give explicit factorizations of recurrence operators in \(n\) that their derivative with respect to \(x\) and their product by \(x\) satisfy.

We have designed a new algorithm (of the Las Vegas type) for the composition of two polynomials modulo a third one, over an arbitrary field. When the degrees of these polynomials are bounded by \(n\), the algorithm uses \(O(n^{1.43})\) field operations, breaking through the \(3/2\) barrier in the exponent for the first time. The previous fastest algebraic algorithms, due to Brent and Kung in 1978, require \(O(n^{1.63})\) field operations in general, and \({n^{3/2+o(1)}}\) field operations in the particular case of power series over a field of large enough characteristic. If using cubic-time matrix multiplication, the new algorithm runs in \({n^{5/3+o(1)}}\) operations, while previous ones run in \(O(n^2)\) operations.

Our approach relies on the computation of a matrix of algebraic relations that is typically of small size. Randomization is used to reduce arbitrary input to this favorable situation. 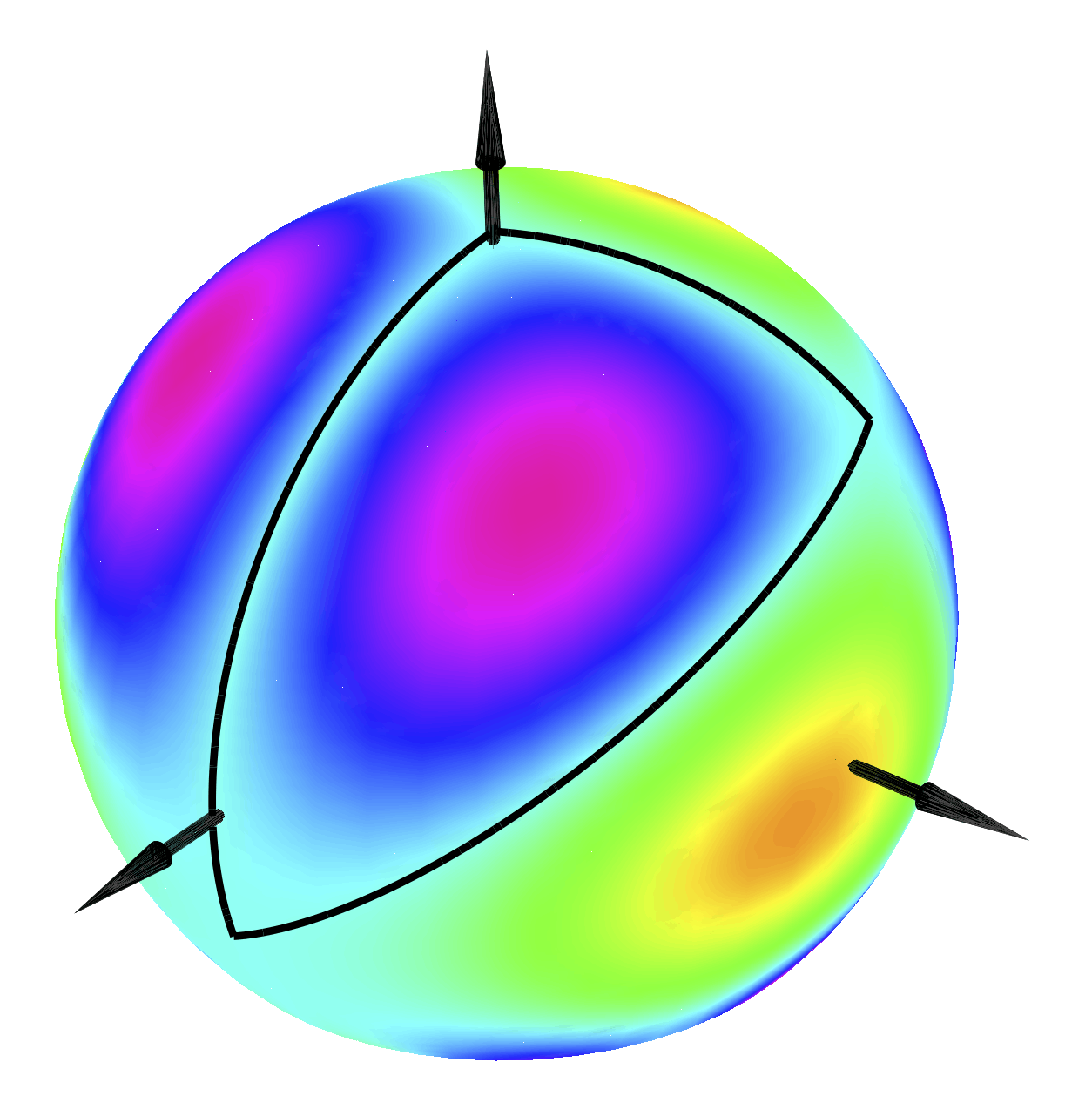 This picture of the eigenfunction for the fundamental eigenvalue of the Laplacian on the spherical triangle with angles \( (2\pi/3,\pi/3,\pi/2) \) originally comes from a problem in the study of random walks in \( \mathbb{N}^3 \) using a restricted step set. Each step set can be associated to a spherical triangle and the asymptotic behaviour of the number of walks \(e_n\) with \( n\) steps, say from \( (0,0,0)\) to itself is of the form \(C \rho^n n^\alpha\) where \(\rho\) is easy to compute from the step sets and \(\alpha \) is related to that fundamental eigenvalue. The sequence \( (e_n)_n \) cannot be solution to a linear recurrence if that exponent \(\alpha\) is not rational. This motivates the study of certified high-precision approximations to the fundamental eigenvalues of spherical triangles. We do this by a combination of the classical method of particular solutions, interval arithmetic, Taylor models and several other tools that let us obtain in particular 100 digits of the fundamental eigenvalue for the 3D Kreweras model. From there, a continued fraction expansion lets us conclude that if the corresponding exponent \(\alpha\) were rational, its denominator would be at least \(10^{51}\).

Analytic combinatorics in several variables aims at finding the asymptotic behavior of sequences of diagonal coefficients of multivariate analytic functions. The starting point of the computation is the determination of the set of minimal critical points of the set of singularities. These are points where this set comes closest to the origin. In the case of rational functions with nonnegative coefficients, this can be achieved efficiently. In general, the situation can still be handled, with a higher computational complexity.

A lot of information concerning solutions of linear differential equations can be computed directly from the equation. It is therefore natural to consider these equations as a data-structure, from which mathematical properties can be computed. A variety of algorithms has thus been designed in recent years that do not aim at “solving”, but at computing with this representation. Many of these results are surveyed in this article.

Definite integrals involving special functions and sequences can be dealt with automatically with a computer algebra technique called creative telescoping. Classical algorithms rely on the computation of an intermediate object called a certificate, whose size can be large and whose computation may be expensive. It turns out that for a large class of integrals, this part of the computation can be avoided, speeding up the whole process.

A. Bostan, F. Chyzak, P. Lairez, and B. Salvy, “Generalized Hermite Reduction, Creative Telescoping and Definite Integration of D-Finite Functions,” in ISSAC’18—Proceedings of the 2018 ACM International Symposium on Symbolic and Algebraic Computation, 2018, pp. 95–102. 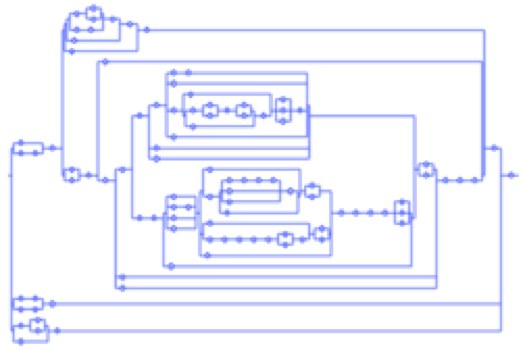 The probabilistic behaviour of many data-structures, like the series-parallel graphs in the picture, can be analysed very precisely, thanks to a set of high-level tools provided by Analytic Combinatorics, as described in the book by Flajolet and Sedgewick. In this framework, recursive combinatorial definitions lead to generating function equations from which efficient algorithms can be designed for enumeration, random generation and, to some extent, asymptotic analysis. With a focus on random generation, this tutorial given at STACS first covers the basics of Analytic Combinatorics and then describes the idea of Boltzmann sampling and its realisation. The tutorial addresses a broad TCS audience and no particular pre-knowledge on analytic combinatorics is expected.

Multiple binomial sums turn out to be diagonals of rational power series. This can be made effective, leading to an integral representation from which a linear differential equation for the generating function can be derived and from there finally a linear recurrence for the sum. This is a very efficient approach that avoids the computation of a large certificate. 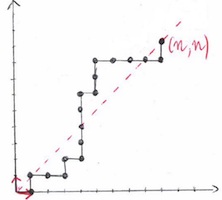 Diagonals of multivariate rational functions encode the enumeration sequences of many combinatorial sequences. In the bivariate case, these diagonals are algebraic power series and an alternative representation is by their minimal polynomial. Yet another possibility is to use a linear differential equation they satisfy. Precise estimates of the sizes of these equations and of the complexity of obtaining them can be computed, showing that the differential equation is generally a better choice. 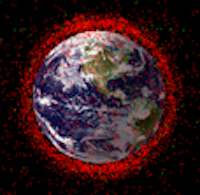 The picture on the right, from the cover of a book by Kenneth Chan on ‘‘Spacecraft collision probability’’, illustrates the quantity of debris orbiting around Earth and the importance of predicting collisions. We describe a method for the evaluation of the probability of such collisions using a closed form for the Laplace transform, an explicit recurrence for its Taylor coefficients and a technique to evaluate these in a numerically stable way. This method compares favorably to other existing techniques.

Definite integrals of rational functions in several variables provide elementary representations for a large number of special functions, or combinatorial sequences through their generating functions. These integrals satisfy linear differential equations from which a lot of information about them can be extracted easily. The computation of these integrals is a classical topic, going back at least to Émile Picard, with recent progress based on creative telescoping.

A. Bostan, L. Dumont, and B. Salvy, “Efficient Algorithms for Mixed Creative Telescoping,” in ISSAC’16—Proceedings of the 2016 ACM International Symposium on Symbolic and Algebraic Computation, 2016, pp. 127–134.

A. Bostan, P. Lairez, and B. Salvy, “Creative telescoping for rational functions using the Griffiths-Dwork method,” in ISSAC ’13: Proceedings of the 38th International Symposium on Symbolic and Algebraic Computation, 2013, pp. 93–100.

Continued fractions provide a sequence of approximations to a number or a function in the same way as series expansions or infinite products do. For a large number of special functions, these continued fractions have coefficients given by an explicit rational function of the index. To a large extent, these formulas can be discovered and proved by computer algebra.

S. Maulat and B. Salvy, “Formulas for Continued Fractions: An Automated Guess and Prove Approach,” in ISSAC’15: Proceedings of the 2015 ACM International Symposium on Symbolic and Algebraic Computation, New York, NY, USA, 2015, pp. 275–282.

The full collection of my recent (and not so recent) papers is here.

Visitors
My office is #329S on the 3rd floor.
Here are directions to get there.